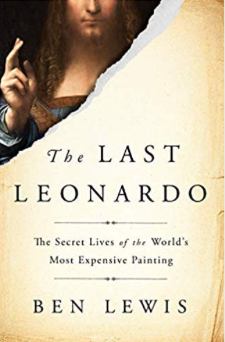 The Last Leonardo by Ben Lewis

At an obscure New Orleans auction house, two guys (Robert Simon and Alex Parrish) find a beat up, heavily restored, painting on wood panel. It appears to be 16th century. The subject is that of Christ with a “je ne sais quoi” about it. They pay virtually nothing for it, $ 1,175 which is way less than the $ 10,000 they claimed. The restoration person (Diane Modestini) who sees everything senses something very special as well. So, they set about establishing a provenance.

Ben Lewis has written a captivating narrative on that real life search to verify an unknown Leonardo daVinci that has been lost for 500 years. His thorough research and interviews reads like a good mystery book. The stories characters include kings, industrialists, ordinary Americans, Leonardo experts, as well as a Russian oligarch and a middle east sultan. He cracks a door open to give us a peek into a world of art business that is not transparent, full of controversy and a bit corrupt. As the world’s most expensive painting at $450 million, there remains little agreement as to a definitive yes or no regarding the master’s hand actually creating the Salvator Mundi. And, to this day the painting’s last purchaser has not yet publicly exhibited it. Where is it?

To find out all the fascinating details.