When the call to artists for the 2018 THE OTHER ART FAIR – CHICAGO presented by Saatchi Art was publicized, Pamela Staker and I were full swing into the second round of our collage collaborations. We decided to apply and agreed that if we both were accepted that we would share a stand. With pleasure, we received the news that we were juried into the fair. This gave us the opportunity to finally debut our collaborative artwork. See 2018 The Other Art Fair – Chicago blog post for a recap. 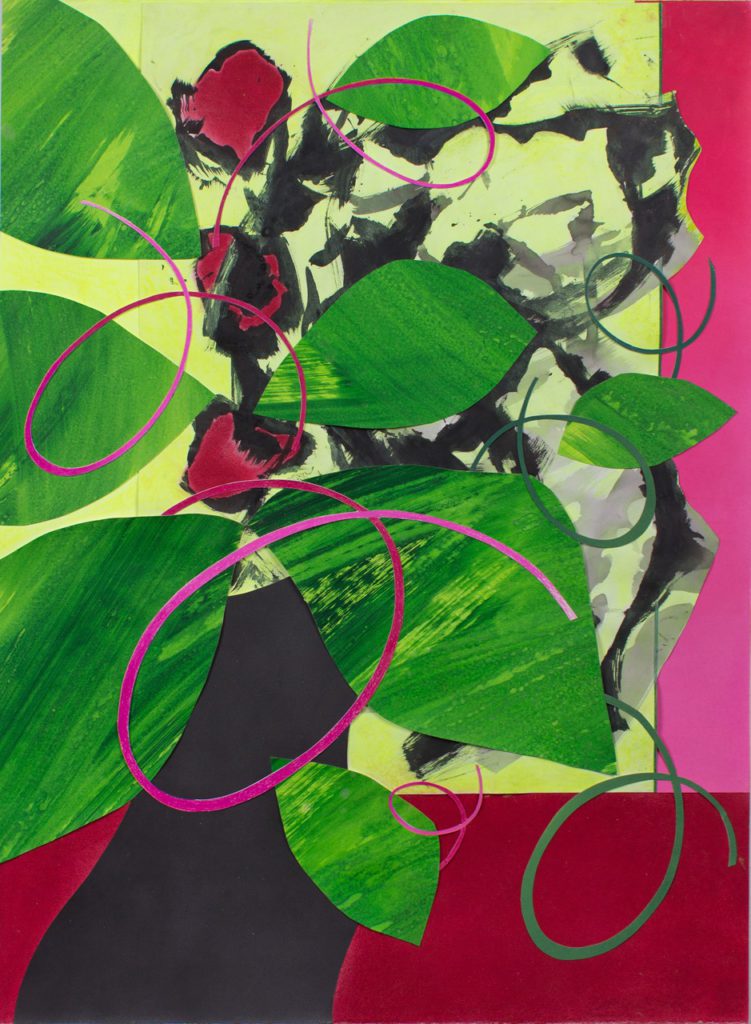 But first, I would like to recount this second round in which our collaboration, “THE FIVE ELEMENTS” has now started to mature. Last year we created together six collages which I described in an earlier blog. That first collaboration presented challenges in how I approached working on an artwork that Pamela had already placed her marks. In addition, we also created five virtual works in the computer where we stitched together elements from each of our respective artworks. Ultimately, our conversations about the process helped to sort out a new approach to making additions and deletions as we passed the collages back and forth. Our experiment brought to both of us a new vigor in our own respective disciplines as well as the desire to plan another collaboration this year.

To add to last year’s experience with Pamela, I collaborated with my friends, Grace Howl (painter) and Amy Ernst (printmaker) in Sarasota over the winter. In this collaboration, “PRESCIENCE OF THREE MINDS“, we three worked together concurrently on two paintings and a drawing. This freed me more to creating with Pamela. The introduction of color into my own drawings is thanks to working with all three women who are fearless in this area where I have been a total scaredy cat. This is where it gets interesting. 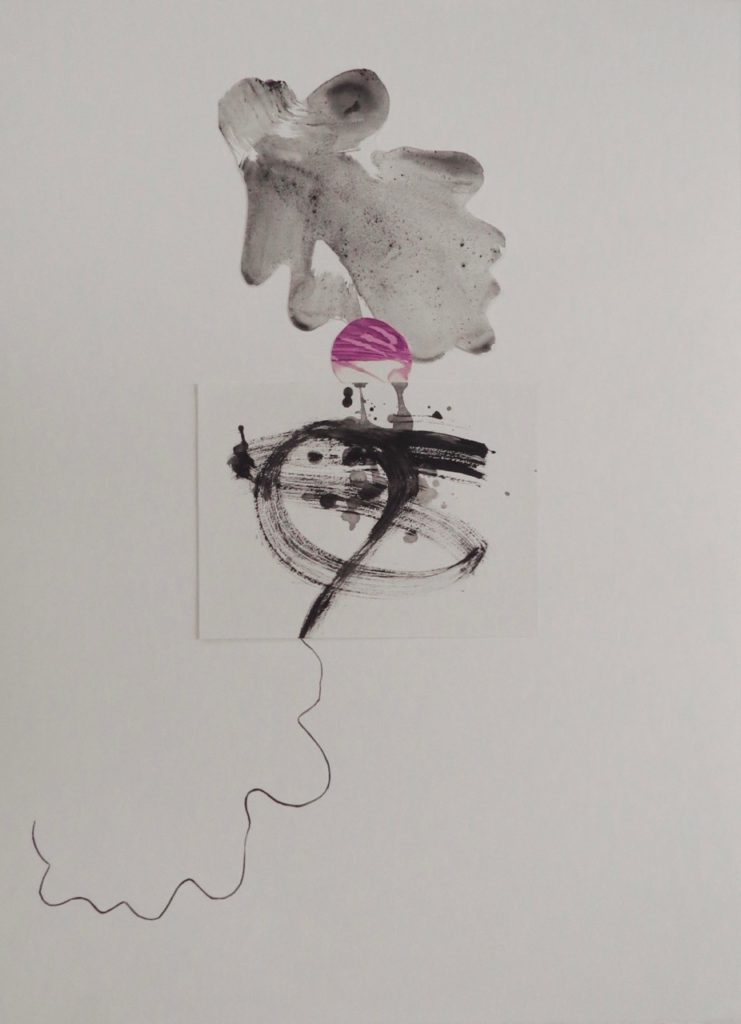 Pamela and I decided to go up in scale from the paper dimensions of 18” x 24” to 22” x 30”. We agreed that she would begin six collages and so would I. Each would work on the pieces to the point when the next step should be taken. You ask how we determined that? Frankly, the decision was made by intuition and our own creating methods. The day we met to make the switch there seemed to be a role reversal. Pamela presented the most zen-like black and white collages with little color if any at all. She had held herself back from giving me too much information. On the other hand, I dove head first into the pool of color by presenting works with a built in dominate color and bold elements. Surprisingly, we both agreed not to talk about the beginnings so we could digest the imagery. I personally think this was a good idea. It enabled us to focus on the information each of us had presented without the other’s influence. 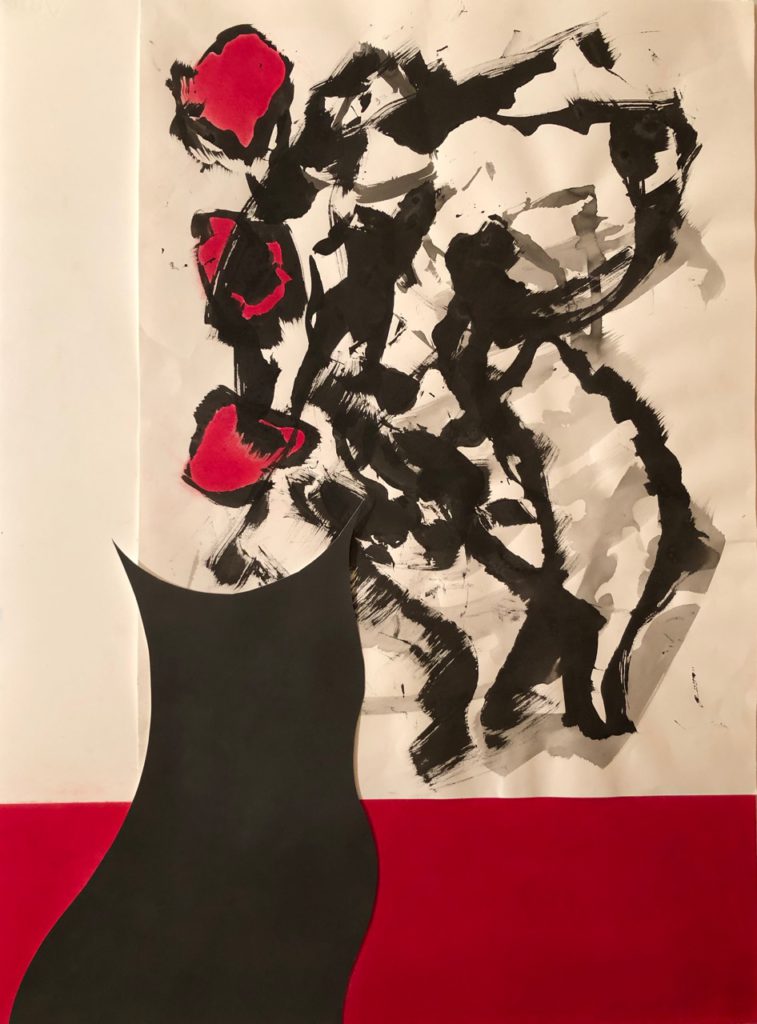 When we felt that we were ready to switch the works back using the same stop point criteria, we set up an exchange date. And again, we chose not to discuss the works. In retrospect, we may just not have needed a discussion although there were a couple collages that were problematic for both of us. I will talk later more about one that presented difficulty and has now become a favorite for both of us. In the end, some conversation came prior to finishing a couple works because either one of us was not quite sure about completion. Overworking the piece was not an option. We waited to glue down the final collage elements until the other had confirmed the go ahead. The real conversation came post completion. We discussed orientation of all the works and decided two would change. One moved from horizontal to vertical and another from vertical to horizontal. Compositional changes did not even come up as we talked. 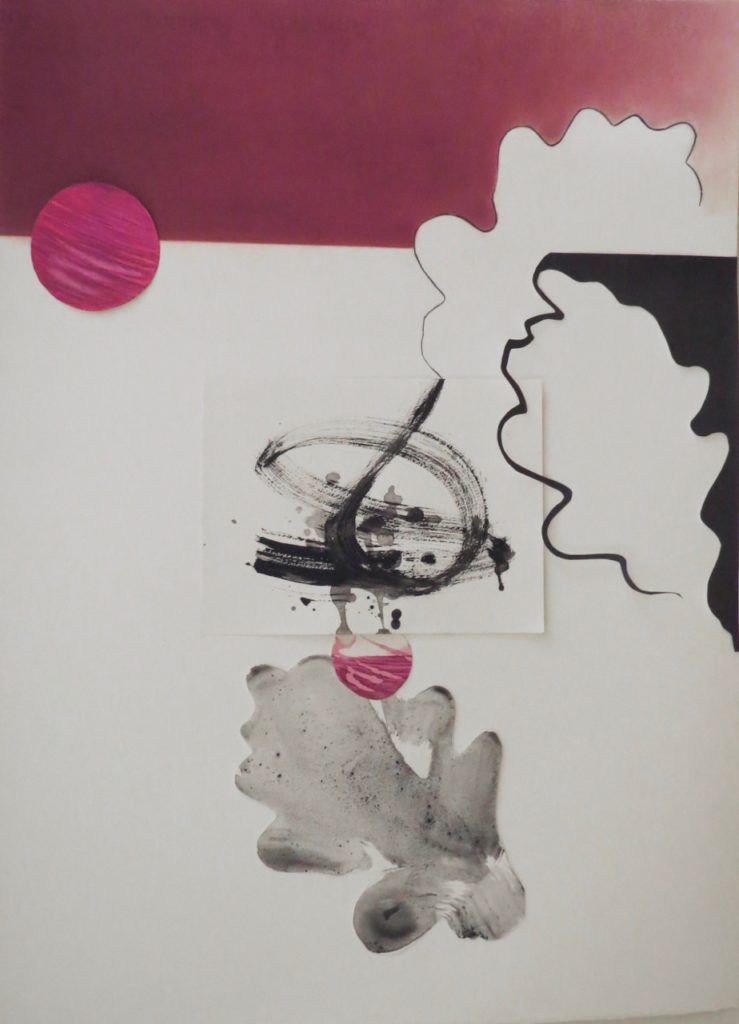 (2) The middle stage that I worked on “Float“. (3) You will find the finished collage at the bottom of the blog. 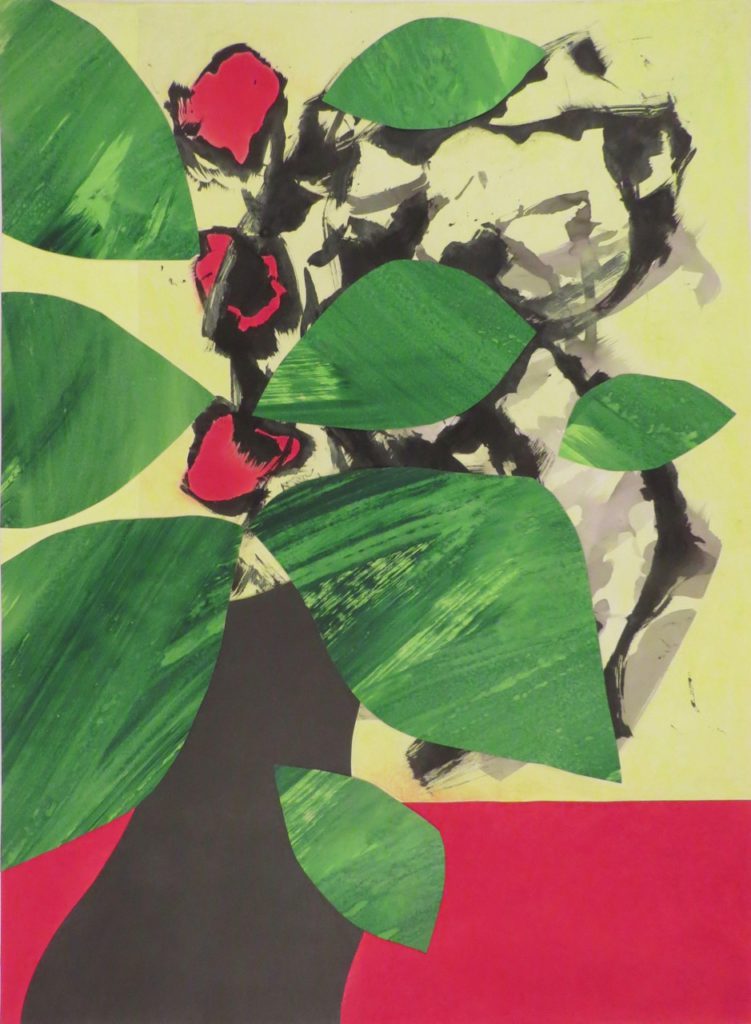 (2) The middle stage that Pamela worked on “Midsummer Smile“. (3) You will find the completed collage at the top of the blog.

Now back to the collage that presented a challenge from the start for Pamela when I passed it to her.  And then, it became a challenge for me when she passed it back. “Sea Plastic” as it has come to be known had a lot of active information with several ink swirls, wispy brushstrokes and a large curvy shape at the bottom. The shades of blended aquas that I had chosen were calmer that those that I had picked for the other collages. 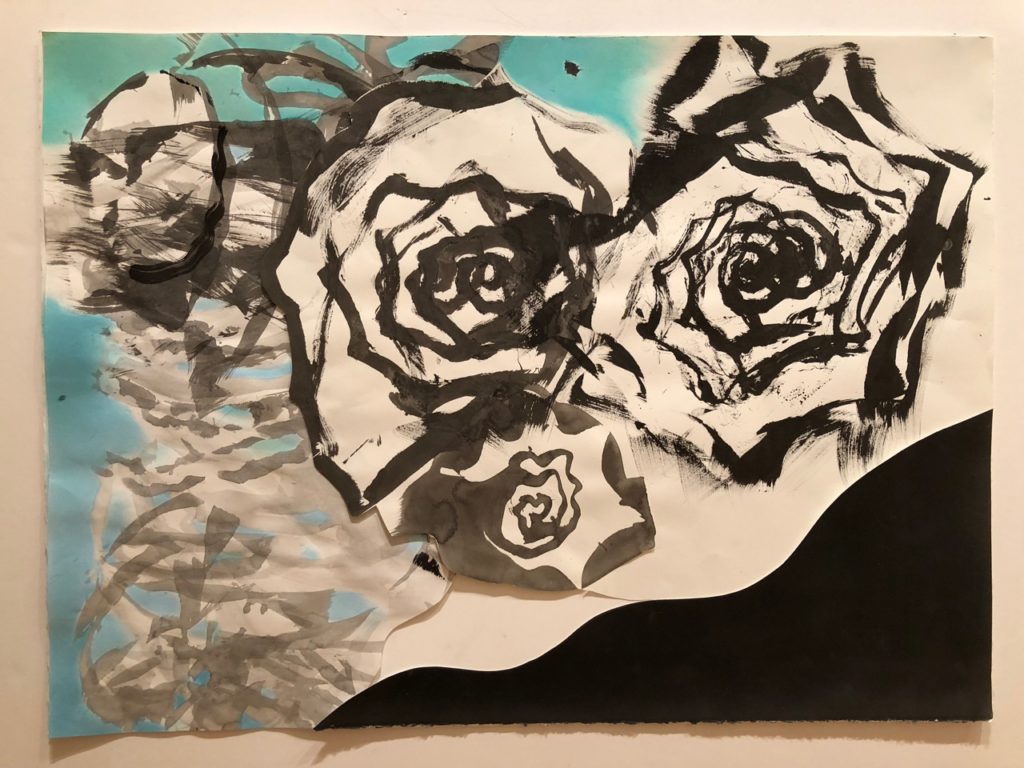 Once Pamela had this piece, she made some additions to calm it overall. She added two new colors. First, she drew magenta lines into one of my circular forms toward the upper left. Second, she added an oval shape on the lower left that was orange with yellow ochre undertones. Pamela also added to the right a rounded form made of white rice paper with ever so slightly printed circular rings. It partially obscured the underlying three swirling forms to a ghost. The last element she introduced was a black textured shape which peaked out from behind the magenta one. 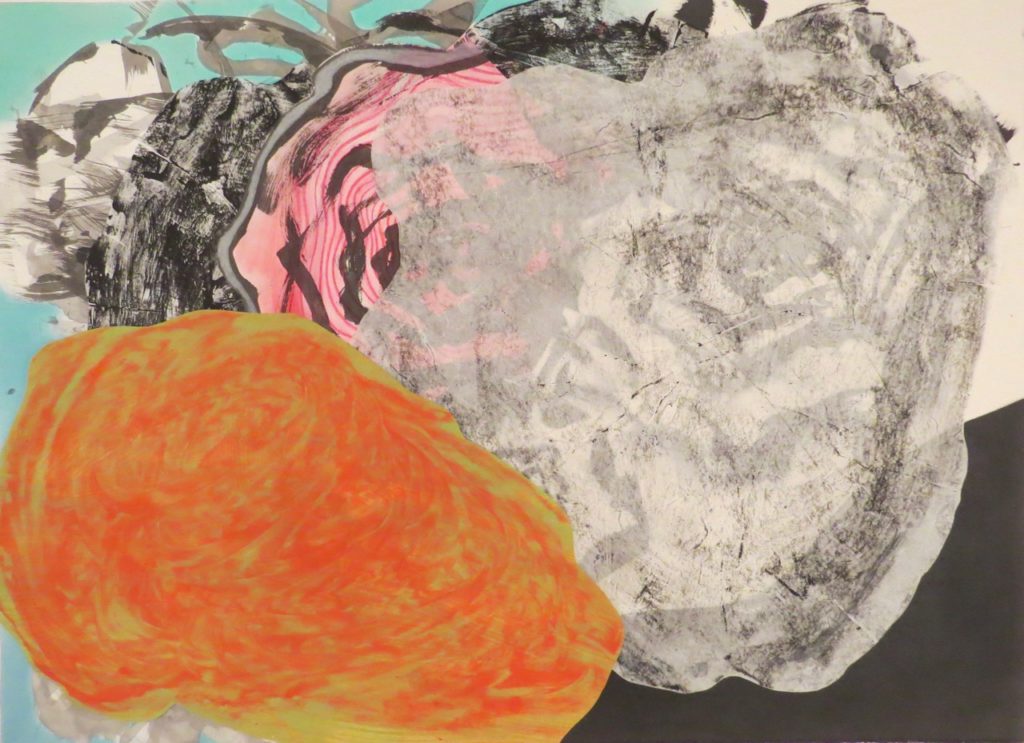 These added colors were not making any sense to me. That was my first challenge. The second happened when I screwed up the rice paper form with some pastel drawing that was not well received by the porous nature of the material. How do I get the colors to marry and how do I fix the mess without rejecting the work as a failure? The second part was easy. Cover it up. It is, after all, a collage. The first part was a bit more difficult because I needed to counter balance the orange/ochre oval shape that so dominated the composition at this point.

So to kill two birds with one stone, I added one new shape of blended aquas to cover the mess and to counter balance the orange/ochre oval. This form which came from my archive of cut shapes introduced a new element of geometry with one side being straight. Its placement accentuated the underlying composition’s diagonal. From here, I added two additional organic shapes. First, I placed a white circular form with black swirled lines to the left and second, a gray toned one to cover the rest of the fouled part on the right. Both finally countered the orange/ochre shape as well as the white rice paper form.

To support the added geometry, I introduced three different sized squares, one white, one gray toned and one black. Each enhanced the push and pull of the composition’s space. The next touches were lines drawn to accentuate two diagonals as well as interrupt the surface of the squares. This added an additional fluctuation of space. Small circular, magenta dots were randomly placed to help pull the eye around the composition. The final element was a cut-out, wavy line. It protrudes from behind the large aqua form and traverses the white shape with black swirled lines. Then, it crosses over the orange/ochre oval slipping back under the gray toned square giving a sense of deep wanderings. 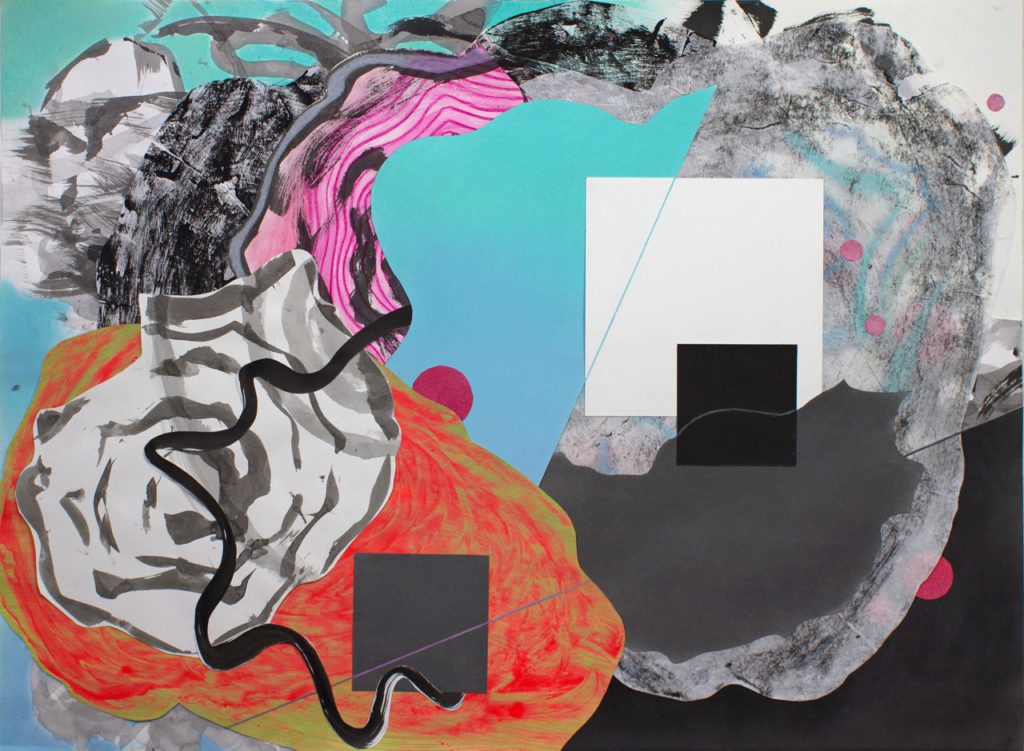 As we recounted our collaboration to those who stopped by our stand during THE OTHER ART FAIR – CHICAGO, a few aspects of our creative relationship have become clear. We had checked our egos at the door. We have implicit trust in one another regarding creative decisions. Our similar interest in nature and urban environments has informed what we do individually. This has helped us to marry our two visual languages. We knew that we worked well together based on a prior professional working relationship. However, this experience has affirmed we like each other’s company. We are having fun with the challenges that have enhanced and energized our individual practices. 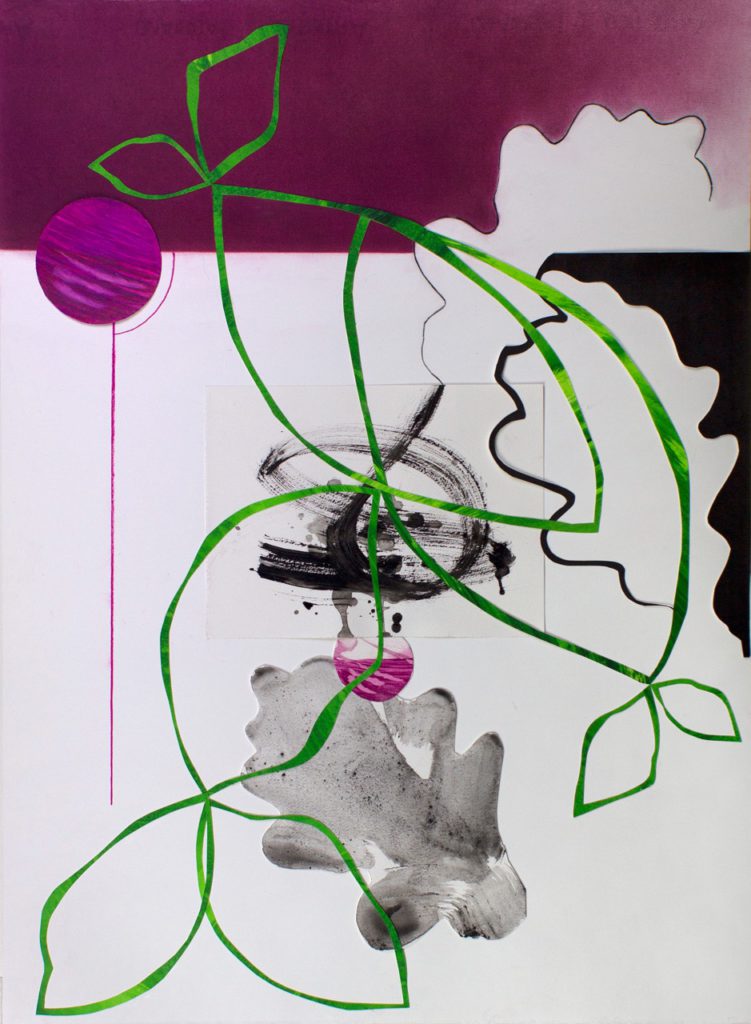 In closing, I should mention that we have decided to create a signature name for our collaboration which combines our first names so that in the future when you see our pseudonym, PAMKAT you will know that it was created by us, Pamela Staker and Kate Hendrickson.

To see all collaborations by PAMKAT go to the Staker-Hendrickson portfolio or Pamela Staker’s portfolio, Collaborations.

This entry was posted in Artists, Collaborations.