I wiggle walk across the beach with my goggles in hand. Upon arriving at the water’s edge, I prepare to enter knowing that I will be bracing as each wave breaks and finally diving into them as they crest. Focused on the bottom and the effervescent zone in between, I see and feel a world that I share through personal observation. I translate what I perceive through light, shadow and movement. The layering of lines and shapes of varied values brings the perception to life. The underlying architectural structure helps freeze the experiential moment and allows visual wandering in and out of the depths. 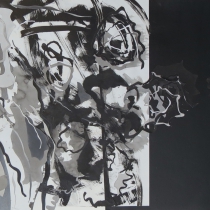 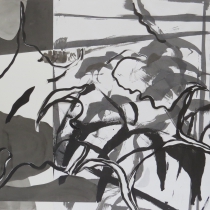 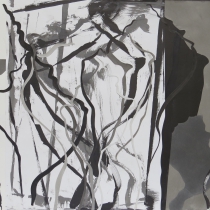 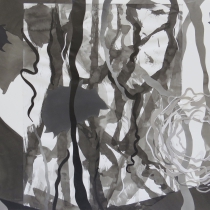 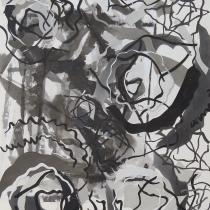 The process: As I continued to cut up unsuccessful Shell Essence drawings to save the best linear marks for the Imaginary Shells,  I realized that the negative shapes were as interesting as those marks which I was saving. So, I saved those too. I then colored those negative shapes with different tones of sumi-e ink. And, I got a surprise. Silhouettes left behind on the underlying paper on which I was painting the shapes had interesting compositional qualities. They spoke to me as a potential underlayment in the process of constructing the Imaginary Shell collages which have come to be titled, “Underwater“. I began by allowing the underlayment to suggest the linear and shape element choices. Then, I moved into layering them to create a visual weaving of depth.